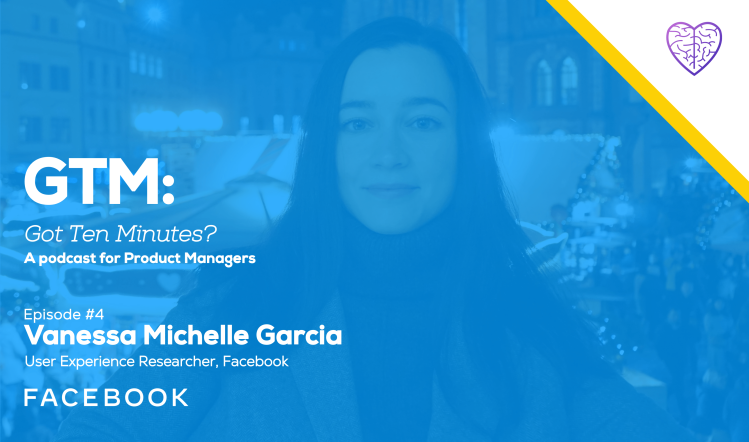 ""Never lead the witness" - Vanessa Michelle Garcia, UX Researcher at Facebook (via the "

After spending the first half of her career creating beautiful artifacts for audiences to be persuaded by, Vanessa decided to design products that people could use to feel smarter and more in control. This is the reason she joined Facebook as a User Experience Researcher on the New Product Experimentation team. Vanessa talks with Dwayne Samuels, CEO of Samelogic, about how Product Managers can use various research methods to properly interact with their users.

Tell us about yourself and what you do at Facebook

I was born and raised in Miami, Florida. In a working-class Cuban neighborhood called Little Havana. I left Florida after High School and received a Bachelor's degree in Graphic Design from the Maryland Institute College of Art in 2010. Mica is a very small 200-year-old Art College, worlds away from Miami. After college, I wasn't sure what I wanted to do for a job except that whatever I did, I wanted it to be creative and in the service of people.

At the time, I had no awareness of user experience design and research as a potential career path. I guess like many UX researchers, I know my path into the field wasn't exactly straightforward. I spent the first six years of my career working in Creative Advertising, and visual design before discovering Applied Qualitative Research, which is what I do. I've been at Facebook for about a year now, living and working in San Francisco with my husband for almost four.

What inspired you to start a career as a User Experience Researcher?

After five years in advertising, I just lost interest. To be honest, in traditional design and art direction, I found it to be very one-sided in practice. For example, as an Art Director, I was personally responsible for designing campaigns for thousands of people in the US to consume with minimal understanding or input from those people. After a few years of doing that it never sat right with me.

I left agency life and joined a FinTech company as a software designer in Chicago. A few weeks in, I asked to sit in on a UX research study that was happening, it had been organized to help our design team understand how older adults prepare for retirement. It was an emotional and profoundly insightful experience and it completely changed how I thought about designing products. That study, and other subsequent studies, made me realize that I was more interested in understanding problems than I was designing solutions for them. That's what inspired me to start a career in UX Research.

As a UX Researcher focused on helping small teams push new apps, what are your objectives?

For a little more context, I work on a team at Facebook called New Product Experimentation, NPE for short. It's a relatively small team.

It's composed of the most gifted, cross-disciplinary product people I have ever personally met, who are all trying to build novel, consumer-focused apps. Our goal is to build, to learn, evolve, and even eventually kill product ideas and to do it very quickly. So as a researcher on NPE, my job is to help my team make decisions about these early-stage products with greater confidence, and hopefully with my hope is with greater empathy for their target audience.

What Research Methodologies do you use for this kind of work?

There are three main types of research that I use.

This research is done earlier on and the questions it tries to address are:

• Who is the audience? • What are their current behaviors? • How do they feel about something?

The point of doing this kind of research is to generate data that inspires what these people will ultimately build and to reduce their bias. The methods part of Foundational Research involves desk research, interviewing people, observing people, diary studies (which is a great way to get data from how people live day to day over a longer period).

This helps evolve an early product concept. It addresses if and how people understand a product idea and how they might use it. Some useful methods for getting there include

What you want to do is get something in front of people early, get their hands on it, and get feedback.

This happens during execution, post-execution, or on an ongoing basis. With Evaluative Research you are:

During this phase, you're always refining and maturing designs by conducting usability testing and surveys that assess user satisfaction.

What should Product Managers know about working with UX Researchers?

The second thing that Product Managers should know is that just because qualitative research deals in human behavior, and typically in smaller sample sizes (so instead of thousands and thousands of data points in a survey, you've got 15 people in a study) it doesn't mean that the output is any less meaningful or less scientific.

What tips do you have for Product Managers who don't have access to a UX Researcher?

Product Managers and Product People should always be talking to and learning from their users or their prospective users. However, how you talk to people really matters.

So first, I would say there's a quote in the UX community, "Never lead the witness."

Oftentimes, Product Managers are so excited about an idea product or a feature, that when allowed to go and gather feedback about it, they'll boast about how it solves the user's problem. When that is done, you're biasing the user. You're never going to get the kind of meaningful, actionable data you need to make a decision that way.

I would advise product people to ask their customers or their target audience:

• Open-Ended questions. • Their recent behaviors. • Show you how they do something. • Or observe directly how they use your product and do it without judgment, certainly without intimidation.

If you're trying to learn about your customer or the viability of product idea, if you're a startup, I would say never ask people to speculate about the future.

Another favorite Product Manager question would be "Would you use this fitness product to lose weight?" and "How much would you pay for this?"

It's just too difficult for human beings to accurately answer these kinds of questions without inadvertently rationalizing. Not because they're bad people, not because they intend to, but they will lie to you. So it's not useful. People see themselves in a very different light, and they think of themselves very differently than how they tend to act. It's just better not to ask people to speculate about themselves in the future.

Via the Got Ten Minutes? Podcast by Samelogic - Listen to the full episode here.